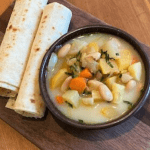 Learn how food tells the story in immigrant novels like Searching for Nora: After the Doll’s House by Wendy Swallow. Try Nora’s navy bean and root vegetable soup. 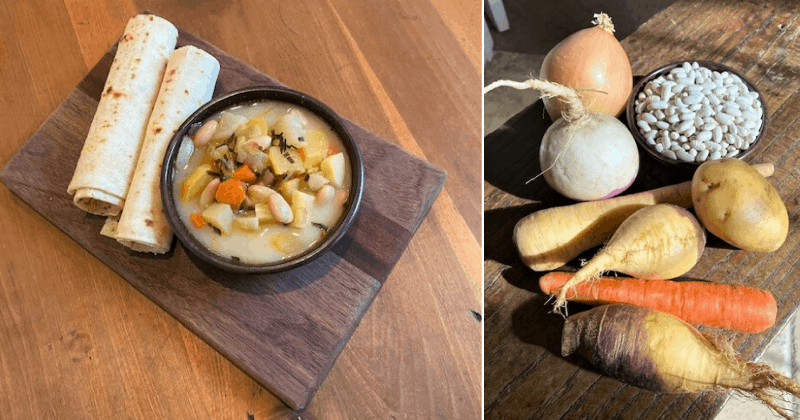 Welcome to Northern Yum! Today I’m excited to share a guest post by Wendy Swallow, author of Searching for Nora: After the Doll’s House. She’s sharing a bit about her new book and how food helps tell the story of Norwegian prairie immigrants, plus Nora’s Navy Bean and Root Vegetable Soup recipe.

My ancestors immigrated from Norway and settled in western North Dakota. We still make many of the traditional Norwegian recipes passed down multiple generations. As food helps to tell the story in novels, food also tells the story for our family and heritage.

I hope you enjoy and if you have any questions for Wendy, please leave a comment!

Author, Searching for Nora: After the Doll’s House

In my new novel about Norwegian prairie immigrants, the character Nora longs one day for a good Norwegian fiskesuppe of cod, potatoes, and cream. But there is little fish available in far western Minnesota in 1882, and so she does what all immigrants learn to do: she looks around at what she has and adapts the recipe, coming up with a bean and root vegetable stew.

Authors often use stories of meals and recipes to convey and develop themes in a novel. When I was doing the research for my prairie novel, I was struck by how often food – or the lack of it – figured in the books about immigrant settlers in the 19th century. A satisfying dinner of roasted prairie chicken. served with fresh peas in cream, meant the family had successfully hunted and had a garden that was beginning to produce. If the family had cornmeal porridge for supper, it usually meant they were heading into tough times.

For Nora, coming up with dinner is harder than it would be for the typical Norwegian farmwife, because she’s actually a bourgeois lady from Kristiania running from her past. My novel Searching for Nora: After the Doll’s House is a sequel to Henrik Ibsen’s famous play A Doll’s House, and tells the story of what happens to his protagonist Nora Helmer after she leaves her husband and children at the end of Ibsen’s play. Without giving away too many spoilers, Nora tumbles down the economic ladder in Norway and ends up in far western Minnesota, where she must manage a prairie household on her limited cooking and housekeeping skills. But she is pragmatic and open-minded, which is how she comes up with a bean and root vegetable soup that gets her compliments at the table. And the compliments matter, because it’s the first sign that she might be accepted by the family that had taken her in.

Searching for Nora is not the first immigrant prairie narrative to rely on food to shift the plot or highlight emotional turns for the characters. In O.E. Rolvaag’s famous Norwegian immigrant novel Giants in the Earth, the wife of the family, Beret, is deeply troubled by the desolation and silence of the prairie. The life her husband is enthusiastically building, with his big sod house and ambitious planting, is too different and strange for Beret. She grows fearful, hanging clothes over the windows to keep out the prairie, and falls into a depression. In one memorable scene, her sons bring home some fresh meat they say is bear, but after Beret cooks it into a stew, the boys cannot eat it, finally admitting it is badger. For Beret and her family, badger is “troll food,” unfit for human consumption. Horrified that they have been reduced to eating such fare, she dumps the pot outside, then stays up the entire night plotting how to get back to civilization. The incident of the badger meat turns Beret against her husband and his hope that they can build a good life on the prairie.

In immigration novels, food – which feeds the heart as much as the body – often signals a nostalgia for the old country. In Willa Cather’s novel about the Nebraska frontier, My Antonia, she tells the story from the perspective of a young boy, Jim, living on a relatively prosperous farm with his grandparents. During a harsh winter, Jim and his grandmother take food to the Shimerdas, a family of recent immigrants from Bohemia who are struggling on their farm. Ashamed of their wretched conditions, the Shimerdas tell their visitors that they were not beggars in Bohemia, and that they will soon be doing better. Mrs. Shimerda gives Jim’s grandmother a bag of something “good to eat,” as she says, but when Jim and his grandmother return home, his grandmother throws the bag into the stove. Jim, however, has secretly sampled the contents and found they were dried mushrooms, a treasured bit of the old country gathered in “some dark Bohemian forest” and carried lovingly to the new world. The mushrooms, treated like garbage by his grandmother, symbolize for Jim the Shimerda’s lost paradise in Bohemia.

For the prairie immigrants, food provided a bond with the world they had left behind, and yet many of the recipes from the old country had to be altered to new world conditions. In my novel, Nora chooses dried white beans to stand in for fish in her stew. She also goes into her root cellar for the vegetables that Norwegian prairie settlers typically planted – potatoes, rutabagas, onions, and carrots. Then she adds some wild local turnips that grew in her part of Minnesota. She cooks all these until they are soft, then adds some fresh cream and butter from their cow, and crumbles in dried greens from scamps or wild onions, which would have tasted like chive. Her soup is not quite the dill and lemon scented fiskesuppe she remembers, but it is tasty all the same. And like most Norwegian settlers, Nora serves her soup with lefse, the potato flatbread they cooked right on the stovetop, turning them with long wooden paddles. Together, the buttery lefse and the nourishing stew are enough to win Nora a little respect in the family.

By Wendy Swallow
For more information about Wendy and her novel, go to searchingfornora.com.

(Nora’s adaptation of Fiskesuppe, a Norwegian Cod and Root Vegetable Soup, from Searching for Nora: After the Doll’s House by Wendy Swallow)

The night before, put the beans in a large soup pot and cover with water.  Heat to boiling, then turn off the heat and leave them covered overnight.  In the morning, drain off the water, then return them to the soup pot.

Heat butter in a sauté pan over medium-high heat. Add onion and season with salt and pepper. Cook, stirring, until onion is soft, 8-10 minutes.

Put the onion, carrots, parsnips, rutabagas, turnips, potatoes, salt and pepper, and the water or stock into the soup pot with the beans.

Bring to a boil, then reduce heat to medium and cook, stirring occasionally, until beans and vegetables are tender, about 45 minutes. Stir in the milk, and the dill and chive, and heat just to steaming (not boiling).  Serve with lefse and butter. 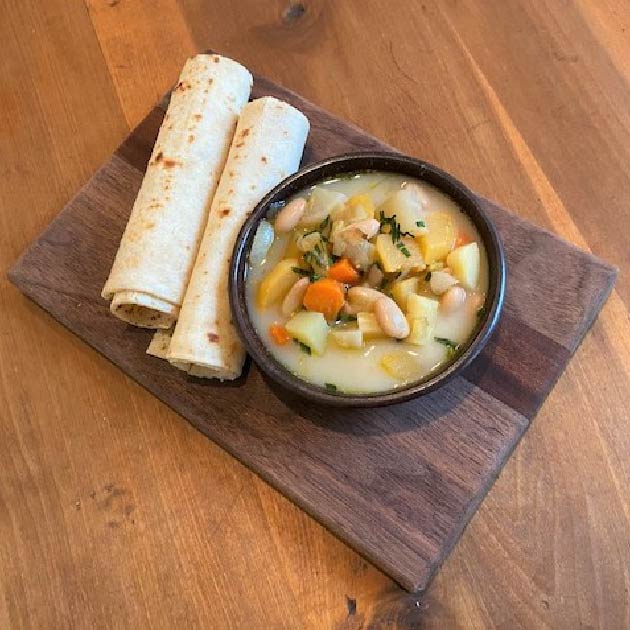 We hope you enjoy this recipe! Stop in and say hi in the comments. 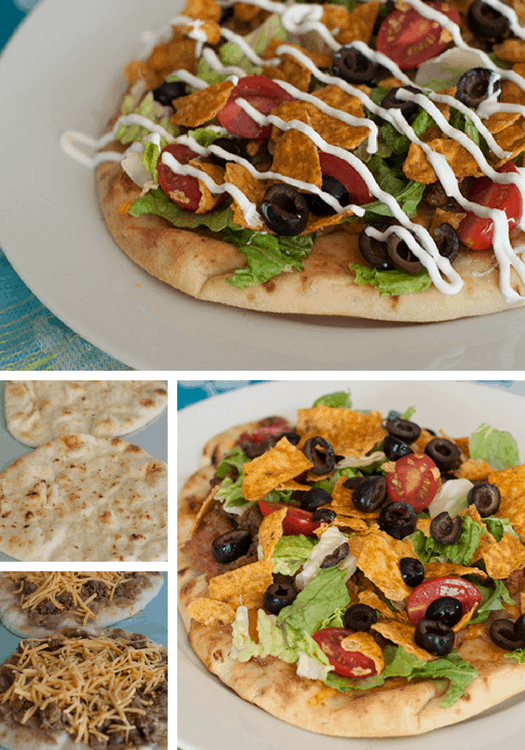 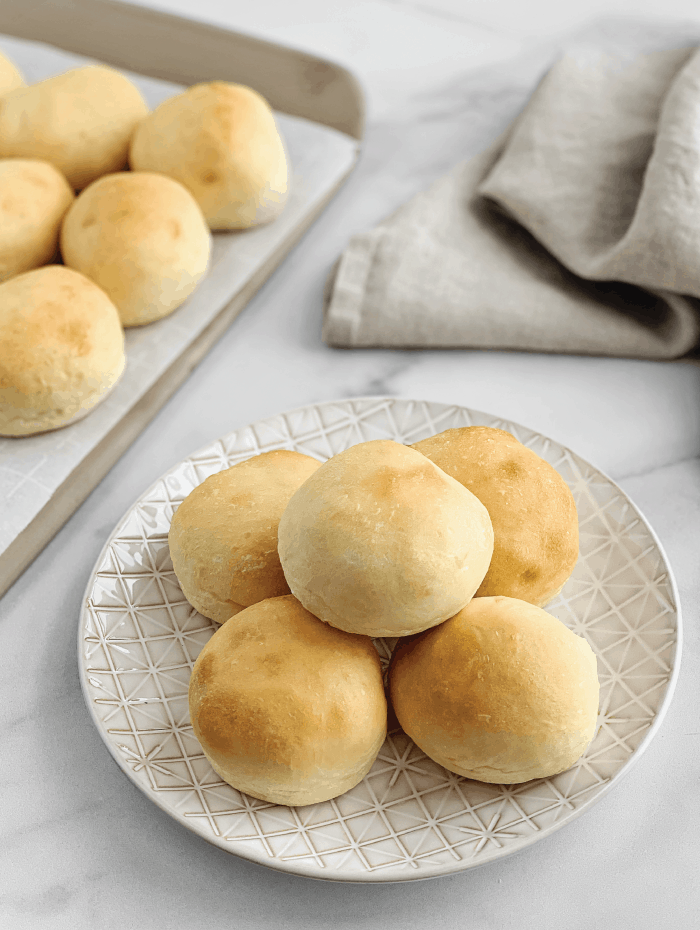 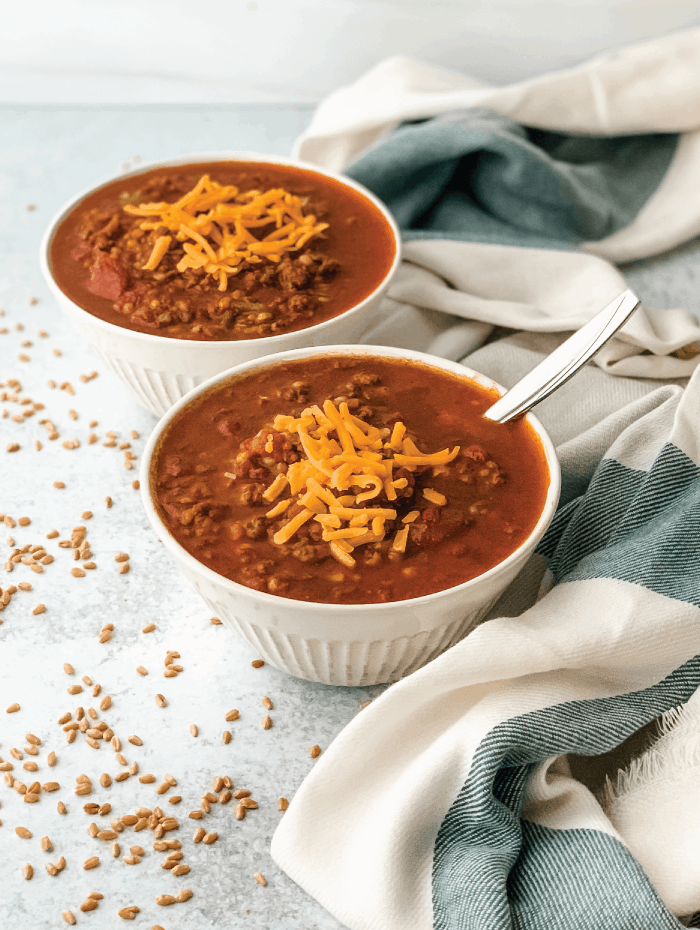 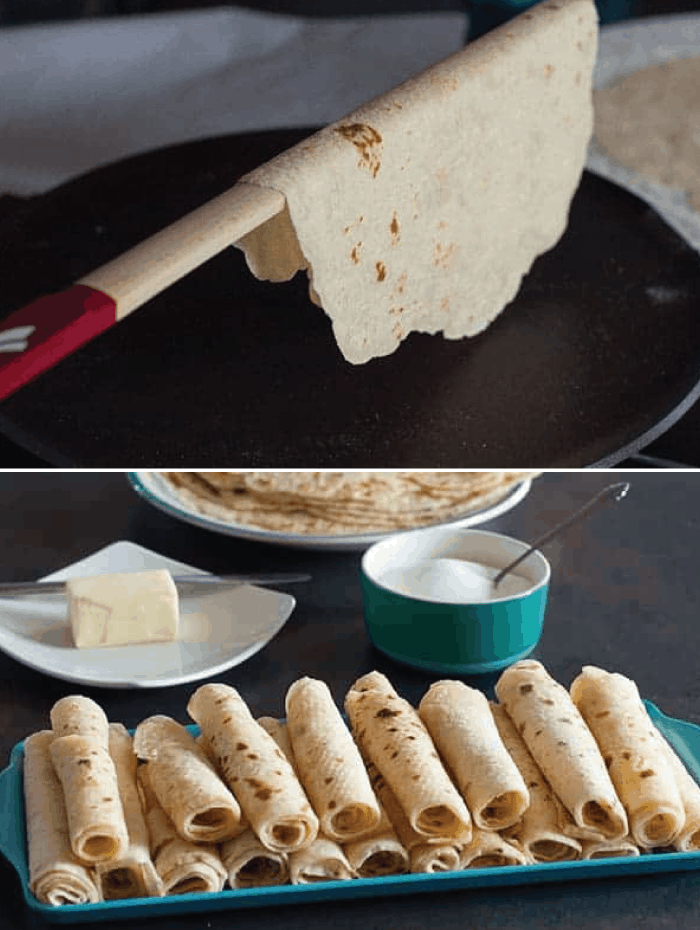 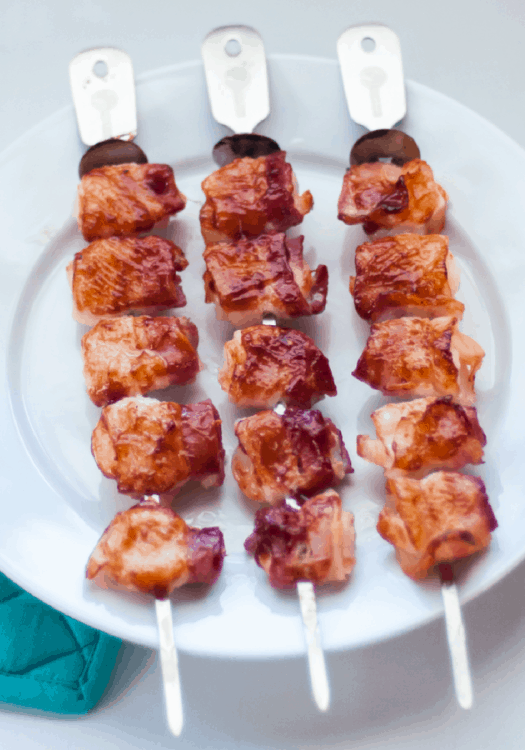 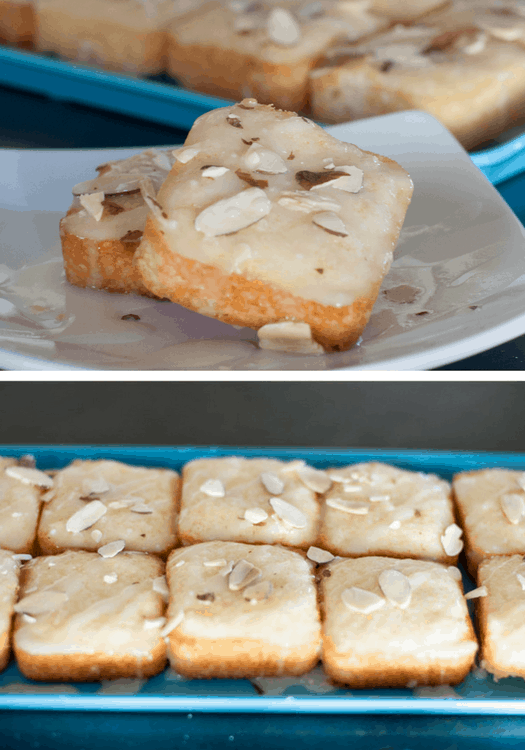 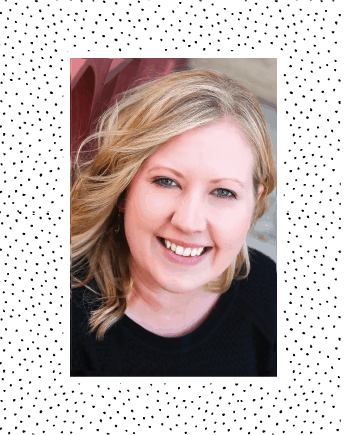 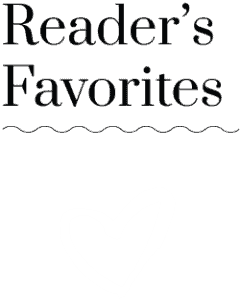 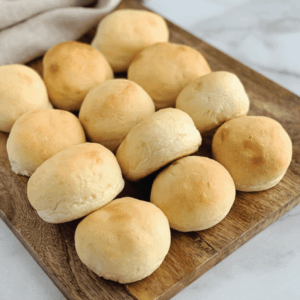 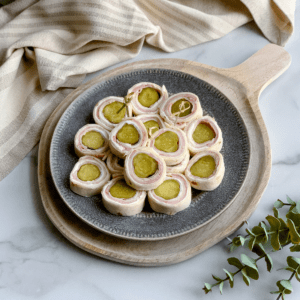 Recipes delivered straight to your inbox.

This website uses cookies to improve your experience while you navigate through the website. Out of these cookies, the cookies that are categorized as necessary are stored on your browser as they are essential for the working of basic functionalities of the website. We also use third-party cookies that help us analyze and understand how you use this website. These cookies will be stored in your browser only with your consent. You also have the option to opt-out of these cookies. But opting out of some of these cookies may have an effect on your browsing experience.
Necessary Always Enabled
Necessary cookies are absolutely essential for the website to function properly. This category only includes cookies that ensures basic functionalities and security features of the website. These cookies do not store any personal information.
Non-necessary
Any cookies that may not be particularly necessary for the website to function and is used specifically to collect user personal data via analytics, ads, other embedded contents are termed as non-necessary cookies. It is mandatory to procure user consent prior to running these cookies on your website.
SAVE & ACCEPT